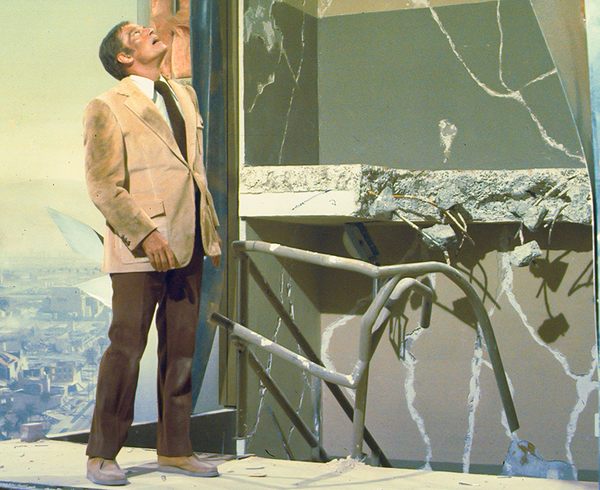 That morning in Los Angeles, Stewart Graff, chief engineer of a construction company, has once again quarreled with his wife Remy. Police officer Lew Slade and his deputy Chavez chase a driver. At the same time, the earth begins to shake slightly. Two scientists, Dr Willis Stockle and student Walter Russell, believe this tremor is just the prelude to a much bigger earthquake in the next few hours …

Earthquake is one of the many Hollywood disaster blockbusters of the 70s set to counter the competition of television: the film was released in 1974, the same year as The infernal tower (the music for both tracks was composed by John Williams). According to the codes of the genre, the realization of Mark Robson aligns some spectacular scenes (9 minutes in total, divided at the beginning and at the end) in which a cast of stars is agitated. The performance of the various performers will vary greatly depending on whether the role is essential to the plot, such as that played by Charlton Heston (Stewart) and George Kennedy (Lew), or more secondary, like that played by actresses Ava Gardner (Remy ), Geneviève Bujold (Denise) and Victoria Principal (Rosa), or even reduced to a cameo like that of Walter Matthau (the drunkard). The peculiarity and the main marketing argument of Earthquake is to have initiated the technical process of Sensurround (cf. bonus) consisting in giving the illusion to the public of feeling, well before dynamic cinema with motion simulation, the vibrations of a real earthquake. The heaviness of the installation will last long and only three other feature films (1976-1978) will be shown with this process. Earthquake was shot on location in Los Angeles with a lot of stuntmen and many special effects based on rather successful models and matte painting (painting on glass: see bonus) neat: the result is still very convincing. As often in this kind of film, it’s the plot that leaves much to be desired. Signed George Fox and Mario Puzo, the scenario invites us to share the fate of a few protagonists who, basically, have a hard time captivating. Sentimental intrigue, difficulty of the couple, hierarchical tensions, political criticism, etc. : all these situations exist only for the sole purpose of preparing the spectator, by making him wait, to share the moment of the disaster experienced with these characters. Very moralizing (an “ethical” end imposed by Charlton Heston), Earthquake conforms to Hollywood political correctness and remains a prime example of the social portrayal of the era with men in action and passive women. Without being a genius of the direction, Mark Robson conscientiously directs his disaster film combining action, humor and gravity. There is no shortage of pictures, including the essential doggie, but the pace is well sustained. For television broadcasting, a number of scenes not retained in the cinema were integrated into a longer but not essential cut (cf. bonus). The bonuses of this blu-ray only partially reproduce those of the American blu-ray of 2019 by retaining only the new bonuses, non-existent on the Universal version of 2013. The only big technical regret is the absence of the English track 2.1 with its Sensurround track (24 bits). Distracting. 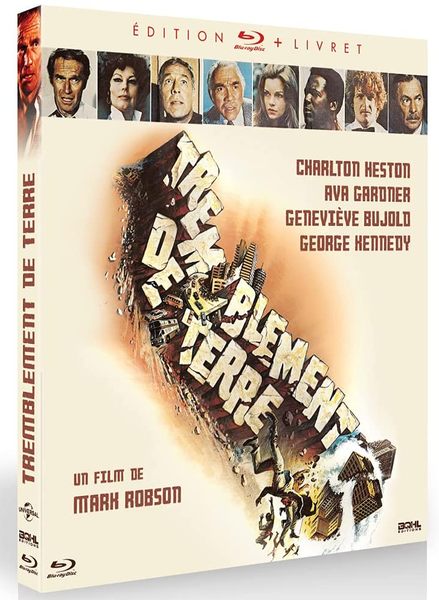 Picture : HD copy, new Master resulting from a 2K scan of the interpositive in the native 2.35 / 1 format (the film was also presented “inflated” in 70 mm in the 2.20 / 1 format), superb definition with a constant sharpness and a remarkable restitution of textures, fine and homogeneous silver grain (shooting in 35 mm, Master Format 2K), the definition drops a little on the special effects, clean image, contrast very well mastered whatever the lighting level , deep blacks, naturalistic grading, warm and shimmering colorimetry, vivid and saturated hues

His : English 5.1 mix, clear dialogues but the level is too low, good dynamics which benefit via the LFE to earthquake sequences with an impressive rumble even if the bass does not go down sufficiently according to Sensurround standards (17/35 Hz at 110 db), efficient spatialization which favors surround effects to the detriment of voices; VF 5.1, clear, dynamic, old but neat dubbing, more dominant and less naturally balanced vocals

Blu-ray and DVD available on Amazon