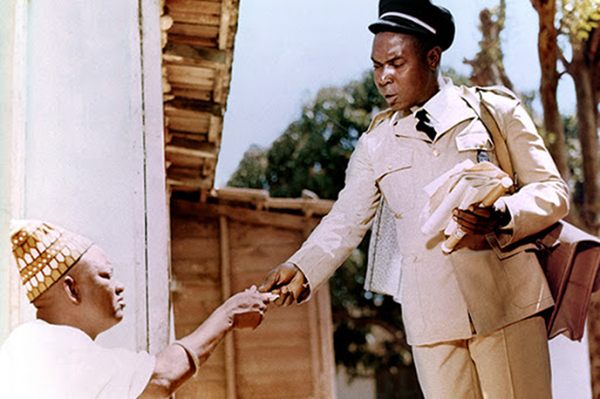 In Dakar, the postman brings Ibrahim a mandate of 25,000 CFA francs sent by his nephew who had emigrated to Paris. The news goes around the neighborhood at lightning speed and this providential manna causes an incredible frenzy. But the post office refuses to hand over the money without ID. To obtain the precious sesame, Ibrahim will have to face the Senegalese administration …

The mandate, a Franco-Senegalese co-production, is the first film directed by the Senegalese Ousmane Sembene in Wolof, the spoken language of his country and therefore likely to be understood by a local population with little literacy in 1968 although the official language is French. Under the aspect of a satirical fable, the film offers a vision without taboo of the corrupt Senegalese society after independence in a country firmly ruled by President Léopold Sédar Senghor: the hero of the story is Ibrahim Dieng, embodied by Makhouredia Guèye, a devout Muslim unemployed, with two wives and seven children. To get paid for a mandate from France, this man, too generous and undocumented, will be cheated by all the people around him: administration, family (sister, cousin), relations and friends. In this society of crooks and parasites, Ibrahim has a rather cheerful candor, given this general lack of humanity, even if he must draw a disenchanted conclusion: “When you are an honest man in this country, people think you are crazy ”! The mandate was written and directed by Ousmane Sembène who, with this film, was consecrated as the “father of African cinema”. Ex-tirailleur, docker in Marseille, where he militates and becomes a member of the CGT and the PCF, he embarks on writing and returns to the now independent country since 1960. Realizing that the Senegalese people (including his mother) do not can read his writings in French, he decides to make cinema, a medium which will allow this committed filmmaker to develop his social criticism in the local language. He was over 40 when he became a filmmaker. The mandate, his second feature film after The black… (1966, Prix Jean Vigo), is an exceptional work adapted from one of his short stories published in 1966. The analysis of the film (cf. bonus), awarded in Venice by the International Critics’ Prize, has not finished to reveal its importance in the birth of African cinema, its extraordinary richness and modernity. Ousmane Sembène, political opponent of the neocolonialist system set up by the Shengor government, denounces the inadequacy and corruption of an administration inherited from the colonial period. In a country where only 10% of the population can read French, Ibrahim Dieng, illiterate, can only reach his mandate by trusting officials (the only ones to speak French in the film) who will swindle him! The film is shot in small groups in a family house: except Makhourédia Guèye, incomparable interpreter of Ibrahim, the other actors are non-professionals from Africa, some of whom are close to the filmmaker. Each take is made in Wolof and in French but Ousmane Sembène will end up removing the French version. The photography in natural settings, entrusted to Paul Soulignac, reflects a desire for quasi-documentary naturalism in order to stick well to the daily life of Senegalese of that time. The mandate is undoubtedly a major film, very clearly politically engaged, whose influence has extended far beyond the borders of Senegal. It is with determination that Ousmane Sembène applied himself to fight against the image of Africa and racism reflected in Hollywood clichés, including in the music he himself composed for his film. Severe criticism of the system, The mandate clearly condemns the neocolonialism in place but is careful not to glorify its sympathetic protagonist because the naive Ibrahim, all victim that he is, is described as a chauvinist and an egotist. A very great founding film. 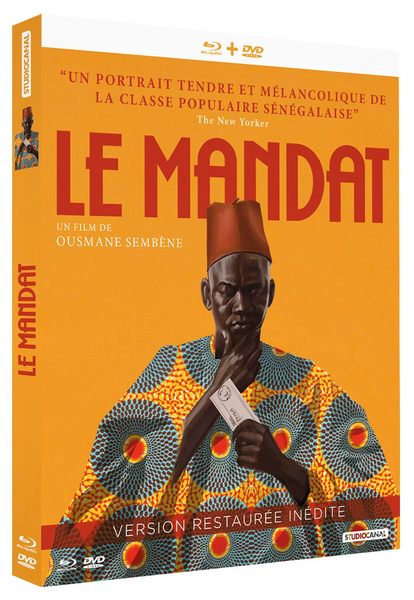 His : Wolof / French 2.0 monophonic mix, clear and balanced dialogues, superb dynamics on the atmospheres and music of Ousmane Sembène, no distortion