Back on A Day in Hell, the last of Die Hard, with Bruce Willis and Samuel L. Jackson in one hell of a buddy movie.

In the landscape of contemporary American action cinema, the saga Die Hard holds a prominent place, for better or for worse. Indeed, if crystal trap (1988), John McTiernan’s masterpiece, quite simply revolutionized the structure of the genre down to its foundations, John McClane’s (Bruce Willis, Hollywood hero always in the wrong place, at the wrong time) franchise has steadily declined over the years.

Indeed, his latest opus to date, Die Hard: Beautiful day to die (2013), was experienced as a terrible betrayal by the fans, in addition to having definitely nipped in the bud a legendary saga of American action cinema, whose hero had become a caricature of himself over the course of the time. But ahead of the franchise’s highly controversial fourth and fifth installments, everyone pretty much agreed that the original trilogy was cult, especially its third installment, A Day in Hell.

An inverted mirror of crystal trap, which marks the return of filmmaker John McTiernan to directing, after he gave way to Renny Harlin (Cliffhanger: Stalking at the top) on the second opus, 58 minutes to live. But in addition to being a perfect sequel to the first film and one of the best buddy movies of the genre with its cult duo, A Day in Hell also marks a historic milestone in American action cinema. At the dawn of a new decade when the World Trade Center attacks will quite simply be a game-changer for the Hollywood blockbuster.

We therefore come back to this sequel which has established itself as another monument of the genre, and perhaps even as one of the last (if not THE last) of a bygone era of American action film. 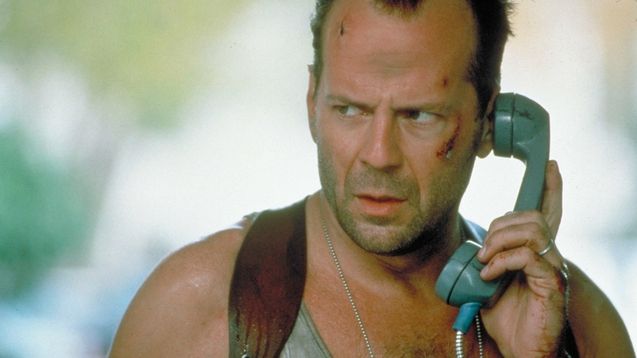 “No kidding, Ecran Large is still talking about me, right?”

We can say thatA Day in Hell has been a hell of a mess in its writing and development. Indeed, several scenarios were considered before the one for which the screenwriter Jonathan Hensleigh is credited (who will continue thereafter in the vein of fun treasure hunts, with Jumanji). The first draft proposed was a Die Hard on the water, with John McClane and his family encountering terrorists on a Caribbean cruise. A script that was abandoned following the start of Trap in the high seas with Steven Seagal, before being recycled for Speed ​​2: Heading for danger (the saga therefore missed out on a first catastrophe).

The second version proposed neither more nor less than the takeover of the Los Angeles subway (an idea that strangely echoes the climax of Speed, the sub-Die Hard by Jan de Bont, with Keanu Reeves). Bruce Willis opposed this version, the interpreter of McClane preferring that his hero can run in a larger unit of place for this third part. It was then that Jonathan Hensleigh’s script appeared on the table (initially titled Simon Says), which producer Joel Silver initially wanted to use to Lethal Weapon 3.