The 38-year-old Greek Georgis Grigorakis, born in Athens, was educated in the United Kingdom, starting with psychology, continuing with photography and then directing fictional films at the National Film and Television School of Beaconsfield. After the making of 7 short films, Digger is his first feature film, a film presented in the Panorama section of the Berlinade 2020.

Synopsis : Somewhere in northern Greece, on the border with Macedonia. Nikitas has always lived on his piece of land in the heart of the forest. Struggling for years against a mining company that covets its property, Nikitas is holding out. The coup de grace comes with the return of Johnny, his son who, after twenty years of absence and silence, comes to claim his share of the inheritance. Nikitas now has two opponents, one of whom he no longer knows but who is dear to him. 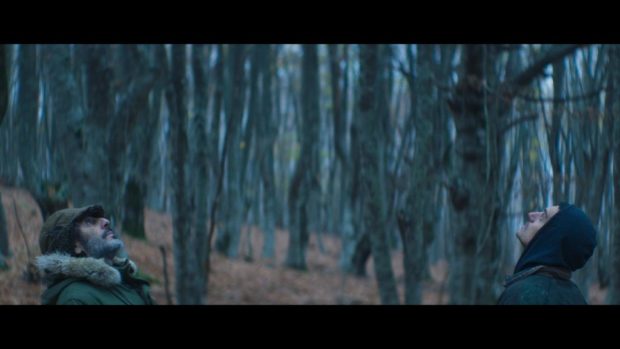 A father and his son

What country is this Greek director taking us to? In which country can such a deluge of rain fall, in which country can one observe such a torrent of mud which carries everything in its path? Quite simply in Greece, in the north of the country, in the region of Macedonia. Nikitas, a man in his sixties, lives alone in a hovel in the middle of the forest and earns his income from his production of apples, nuts, chestnuts and kiwis. An austere life which seems to suit him perfectly since he stubbornly refuses the financial proposals of a mining company to which the purchase of the land of Nikitas would allow a big saving on the construction of a road. In the nearby village, shared between those who want to stay at all costs and those who see the opportunity to start a new life, he is considered to be the most important bulwark against the mining company, this “monster “Which pollutes the soil” by throwing its toxic debris in the gardens, which upsets the balance of nature, which disrupts the climate and creates conflicts, wars “. Many in the village enjoy his verbal fights with the representatives of the mining company, whether it is to accuse them of being responsible for the torrent of mud that nearly carried him away or to protest against the cutting down of a walnut tree full of nuts.

One fine day, or, rather, a fine night, a motorcycle arrives that Nikitas was not expecting and it is with a gun that he greets its driver. This driver is her son Johnny that her mother took with her when he was still a kid when she had had enough of life in the forest and missed the sea. Johnny presents his father with a document, his mother’s will: “I, the undersigned, Eleni Douka, by this will make my son John Douka the sole legal beneficiary of my property after my death, ie half of the 40,000 m2 of land. farms shared with my husband Nikitas Kontaxis ”. Which side will this son, Nikitas never see growing up, who is especially interested in the practice of motocross and who knows nothing about the forest?

For tourists who visit it, the Greece is a sun-drenched maritime country. For some of its filmmakers, the best known being Theo Angelopoulos, the Greece seems to be above all a country with low skies and harsh winters. For his first feature film, Georgis Grigorakis ranks with these filmmakers and it is in the middle of autumn, in the north of the country, in the mountainous region of Mount Cholomon, near Thessalonikie, that he went to shoot Digger. Two main themes intersect in this film. The first relates to the relationship between a father and a son who find each other but who do not really know each other. The father is a lonely, hardworking and stubborn man. His wife left because she couldn’t stand the environment he had chosen to shelter their couple any longer, she took Johnny with her and she was the one who raised him. Very skillfully, the director “walks” the viewer throughout the film, sometimes giving him the impression that a strong bond is gradually being created between the father and the son and giving him the opposite impression. scenes later. The second theme lies in the fight of one man, Nikitas, against what he calls the monster, a mining company that trashes its environment. Greece saw a few years ago demonstrations against large mining operations, the most important concerning the opening of a gold mine in the forest of Skouries. This monster can be seen as a metaphor for an economic system that does not take into account the balance of nature in its search for profit on the one hand, and consumerist thirst on the other. This monster is somehow illustrated in the film by the particularly powerful excavator that gives the film its title, a machine capable of destroying but also capable of saving.

Digger is of course a film that you can watch and the photography of Giorgos Karvelas deserves only praise, especially since the weather conditions were not always very favorable in terms of light. Digger is also a film that can be listened to, the noises revealing themselves to be of great importance: noises of the forest, noises of Johnny’s motorbike, noises of the mine site, etc. Vangelis Mourikis, the interpreter of Nikitas, is well known and highly esteemed in Greece. His experience allowed him to be very active in writing the screenplay. Argyris Pandazaras, the actor who plays Johnny, is above all a theater actor. This is also the case with Vangelis Mourikis, the interpreter of Mary, the young woman who runs the bar where the inhabitants of the village meet to chat, to sing, to dance. This bar, you could almost call it a saloon, so Digger has almost all the characteristics of a western. A return to the sender insofar as, very often, westerns very often have the characteristics of a… Greek tragedy!

For his first feature film, the Greek director Georgis Grigorakis knew how to find the right tone to combine the two themes that were close to his heart: the reunion of a father and a son separated for many years and the obstinate fight of a man against a mining company that is ransacking its environment. There is no doubt that lovers of good westerns will appreciate this film!