Bruno Delaye, you are the founder and organizer of the International Surf film festival in Anglet, did you think 17 years ago that your festival would soon reach its majority?

Not at all, already having succeeded in making a double-digit edition seemed incredible to me at the time, so to reach almost the majority, it’s crazy. An adventure that continues like this is incredible!

What is the genesis and the singularity of the festival?

I am from Toulouse and I studied there. Since I was born my parents, grandparents have come to Capbreton in the Landes. I had older brothers who surfed so younger I could also practice surfing since I was 4 years old and I am now over 50, so it’s a sport that counts a lot in my life, through a past as a competitor until the age of 18 and then a lot of trips which forged my personality and my pleasure of surfing. Surfing is therefore an integral part of my life.

Another of my passions is cinema (and images).
As a child, I attended a lot of screenings. There were directors who went around the world with their reels and their films made me dream a lot.
Then I studied law and from the license, I changed my path by moving towards communication to prepare a master’s degree in political science and a DEA in audiovisual law (I wrote a thesis devoted to cinematographic distribution).
Being passionate about cinema this allowed me, among other things, to get accreditation for the Cannes Film Festival in 1996 and there I took a huge slap: I stayed there ten days, I saw a lot of films ( I watched five a day). I have always been a big consumer of films and I told myself that it was crazy that a film festival does not exist in the world of surfing when some directors and authors sometimes spend several months or several years to make and editing films, there is no professional and artistic recognition for these people and the quality of some of their productions is not known to the general public.
It was therefore during this period that the desire to create a festival dedicated to surf films was born.
Then, my experience in the audiovisual sector (La Cinquième, Cannes, Paris Première) then led me to be a consultant for the creation of television channels, at the end of the 90s when we witnessed the explosion of many thematic channels.
The idea of ​​setting up a festival came back to me in 2003. I prepared a file to propose it to three municipalities: Capbreton-Hossegor, Biarritz and Saint-Jean-de-Luz. The first to respond and to be ultra responsive was the mayor of Saint-Jean-de-Luz who received me on December 26, 2003 to tell me that he was very keen on the idea of ​​creating this festival with me .
The first edition took place in June 2004, so it’s been 18 years now!
(Knowing that last year we had a blank year)
We stayed six years in Saint-Jean-de-Luz, settled at Jai Alai. I remember the time when we had a beautiful evening in the bay of Saint-Jean on the little beach there was. We had screened two films one evening, it was magnificent, not a breath of air, an inflatable screen (like at La Villette), a magnificent three mast was anchored in the middle of the bay, it was crowded with people! Visitors keep an unforgettable memory of it but as the mayor of the time said, we cannot continue like this every year with the coefficients which vary, the beach which is very narrow
We arrived at a time (11 years ago) when the mayor of Saint-Jean-de-Luz therefore let me elegantly leave for Anglet. 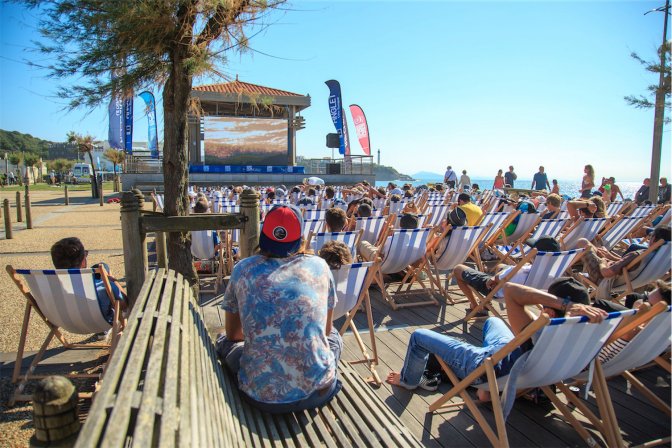 What is the guiding principle of the festival?

We could compare the programming to that of the selection “Un certain regard” of the Festival de Cannes. These are not necessarily very marketed films, with the feat above all, rather they are independent films that tell real stories, which inspire and where there is a real effort of writing, which give the population food for thought. who surfs today. Surf fad is no longer in fashion, but surfing itself has never been so fashionable. So I am positioning myself as a flag bearer to defend this culture, its richness and its history.
Meeting, sharing, respect are the bases of beach culture and these notions that I want to disseminate during these four days of festivities.

I also want the festival to remain simple, humble, professionally organized but that all spectators can rub shoulders with everyone: personalities, directors, surf stars, members of the jury must be accessible to all. The very essence of the festival remains sharing.
This is also why this a free and outdoor event.

Are there other festivals in the world of this magnitude and with this theme?

Since I created this festival, many have developed all over the world, I have helped some to be created, whether in Portugal, Indonesia, Germany, Switzerland, France…. Today it they are everywhere! The Anglet Surf Film Festival is the first to stay true to its format. That is to say that I took the example of the Cannes Film Festival, all things considered, by telling myself that it was necessary to create recognition. It is therefore a mini Cannes Festival devoted to surf films, since 2004 it has been so and in this format we are to date the oldest and the biggest festival in the world.
Some directors and films come from all over the world: from Japan, Brazil, the United States, Australia, South Africa… to present their productions in Anglet. 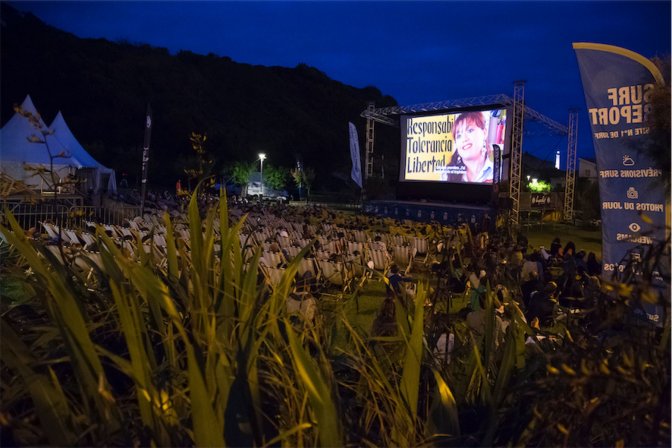 The International Surf film festival is also a festive event around surfing with exhibitions, concerts …

In previous editions, I offered lots of exhibitions, music concerts, festive evenings because between 8 p.m. and 10 p.m. There is a space available for this kind of proposals, it is an interesting time slot at the receptive and festive level.
Precisely, before the Covid crisis, I had proposed to the town hall of Anglet that the festival partially relocate, without letting go of the waterfront, deckchairs, to invest the theater of Quintaou, in which I wanted to infuse the festival a little through conferences, very beautiful exhibitions which would make it possible to showcase quality collections (boards, photos, objects related to surfing….). In the years to come I want to strive to give even more a strong and major cultural dimension to this festival.
This year, due to sanitary measures (1000 people) and the organizational timeframe, we will still be offering interludes with electronic music, but no big concerts with a huge number of standing people. We will therefore stay in a sound atmosphere with a DJ who will offer electronic music. This year we therefore remain soft because of the context!

What is the local roots of the Anglet international surf film festival?

The Basque coast is also the cradle of surfing in Europe, it makes sense that the festival takes place here.
For me, the city that hosts the festival is the reference partner. The image of the festival is closely linked to the place in which it takes place. Whether it was Saint-Jean de Luz before or Anglet today, it is very important for me because the city strongly and financially supports the event, which provides infrastructure, technical means and money. Likewise, the Pyrénées Atlantiques department has been on our shores since the start of this event.

How many films do you offer in competition?

A big twenty. There is a documentary selection and a short film selection. It has also happened in the past that we have presented fictions, which also fully deserve to compete. I can give you for example two outstanding films, an American and an Australian: The Perfect Wave by Bruce MacDonald with Scott Eastwood, and Drift, by Morgan O’Neill and Ben Nott with Sam Worthington. 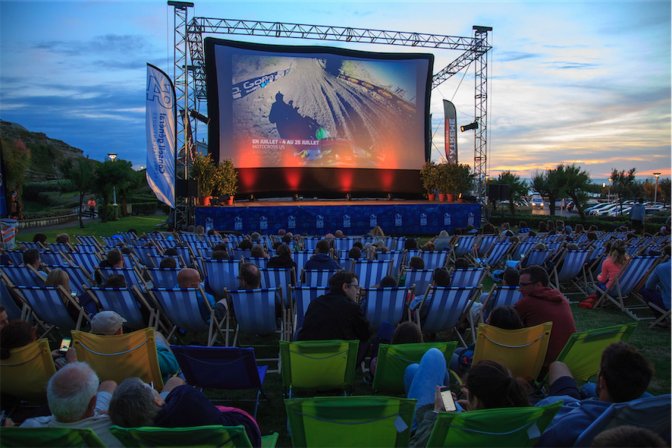 How does the selection of films in competition take place?

I select the films on my own, I am contacted throughout the year by directors and producers who keep me informed of their productions and I receive films from all over the world. In 2021 I received about sixty and in the end I keep about twenty.
I can’t keep them all, because the festival only lasts four days and sometimes the films are not good, the projects are different and sometimes there are redundancies, so I have to make choices. On the other hand, I systematically come back and give an answer because I know the difficulty in making films, I never leave someone in pain. I take the time to give my opinion by justifying my choices, whether in the right way or in the wrong way.

Bruno Delaye, what are your selection criteria?

What makes a beautiful surf film is above all, at the same time beautiful images, beautiful music and the message that it conveys, you must feel a real effort of writing and construction.
To illustrate this, I am thinking of a film in competition: Havana Libre, by Corey Mc Lean, who explains the history of surfing in Cuba, a sport that was banned because the authorities were afraid that surfers would flee the regime. The few surfers who had a board or a piece of polystyrene were playing hide and seek with the police by going to take a few waves, then they fought to create a Cuban federation, which the authorities finally accepted and recognized as a discipline. It is a very beautiful documentary which will certainly be selected in many festivals. 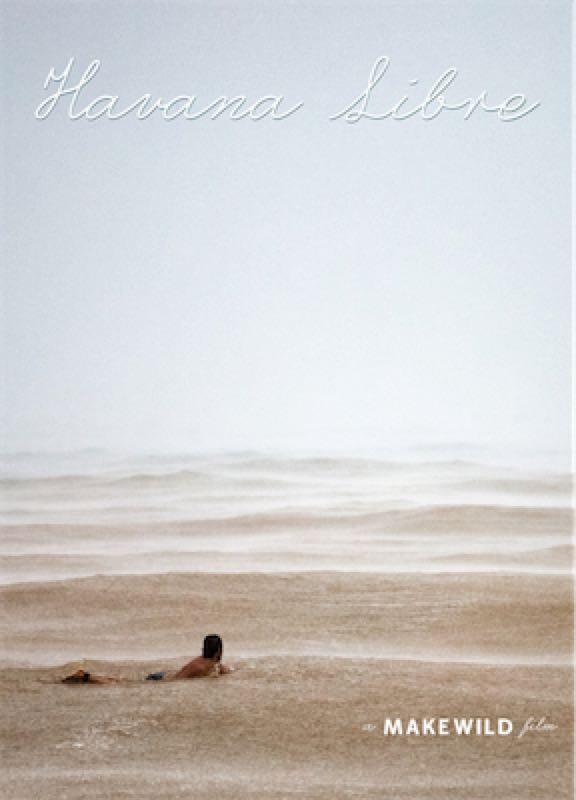 What backgrounds do the members of the jury come from?

The jury panel represents all the different facets of my project. It could be, a surfer, a musician, a journalist who has never set foot on a surfboard, a writer… the general idea being to have a connection and a sensitivity with the ocean.
This year, for example, we will have Tiago Pires, professional surfer, Koralie, contemporary artist, Elisa Routa, journalist, Laurent Masurel, photographer… a very diverse panel.

How many prizes make up the festival and what rewards do the winners receive?

Seven prizes will be awarded at the closing ceremony. Without listing them all we can evoke, the prize for the best film, the price of the image, the best musical band, the favorites….
The reward is in the form of a trophy, given our limited budget we do not have the financial means to offer rewards.
I would love ! But in this human adventure, it is above all the passion that drives me.

See you on Thursday, July 8, at the end of the evening to discover the winners!