Try to understand what can be behind the design and development of Amazon Studios’ latest mega-production, The Tomorrow War, which gathered a majority of votes AGAINST him.

When the future will look The Tomorrow War, he will be able to take stock of what the writers considered to be the essence of the popcorn movie in 2021. 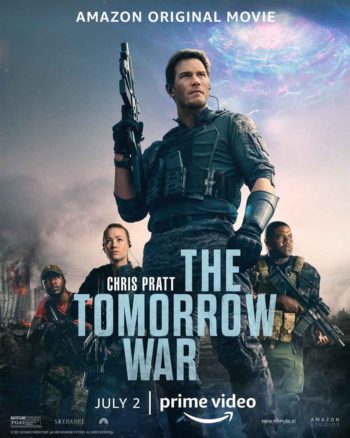 -that the family and the fatherland were always the fundamental values ​​(ist) es, and that a resigning dad may pass on to the next generation his cowardice as an alpha male, an apocalypse can always give him a second chance, (I’m not a hero, I just try to save my daughter) and end up bringing in the trash before galloping bobonne on the forecourt.

-that recycling, if we didn’t give a damn about the trash in question, we did not forget to practice it in the entertainment industry. Starship Troopers, Aliens, Prometheus, Terminator, Edge of Tomorrow are thus sorted, cleaned, bleached and watered down for family entertainment that will take care to avoid any drop of blood or dismemberment on the screen.

-that the military were always so confined to wanting to bomb the field of operations where the good guy just wanted to save other good guys, or not to listen to him when he had found the solution to save the world.

-that democracy was a value to be maintained, and that we can recruit in a great universal enthusiasm obese women and women who, delighted to have been rescued by the hero when they were dead weights, he will show their gratitude by sacrificing themselves for him. And that those who die always do so with joy, because they are condemned by cancer, and that they will be able to scream in a cathartic explosion sentences that should be put on the toilet paper of nursing homes: ” If I’m gonna die, I’m gonna die my way! “.

-that the lightning of Ghostbusters were still on the page 40 years after they appeared to sell science, and the missions were to search for hard drives and vials in secluded places, which might be more like a trip down memory lane.

-that to make the film last 2h20, the method consisted in making a young woman say ” I’ll tell you when you need to know “, or ” No need to talk about it before we’re sure “

-that the writers had developed a meta screen so as not to assume too much the Z dimension of their turnip: irony. With that, a vulcanologist explains to you in 90 seconds what the future has not taken care to question, and we tumble into Russia undercover to cut the alien with the grinder without any complex.

-that the CGI had finally not progressed too much in 30 years, nor the phallic and vulvar obsessions of the designers of monsters, and that we had a clear tendency to confuse ugliness and dread.

In the future, they will also find that in 2021, Americans wanted to talk about global warming, but that apparently it was forbidden. So they put screens in the background of a high school class, and linked the advent of aliens to the melting ice. But in Russia, history of relocating the issues and responsibilities. Anyway, in 2021, it was explained that the UN could not solve the world’s problems, and that only the heroic, individual and paternalistic initiative of a real hero could make the difference. And that the only community that could be tolerated was that of the public on their sofa in front of Amazon.

In 2021, they were pretty darn visionaries.